Reggie Jones, Jones Beach’s Longest-Serving Lifeguard, Dies at 93
He began keeping an eye on beachgoers in 1944 and kept doing it for 64 summers. He made more than 1,000 ocean rescues in his career. 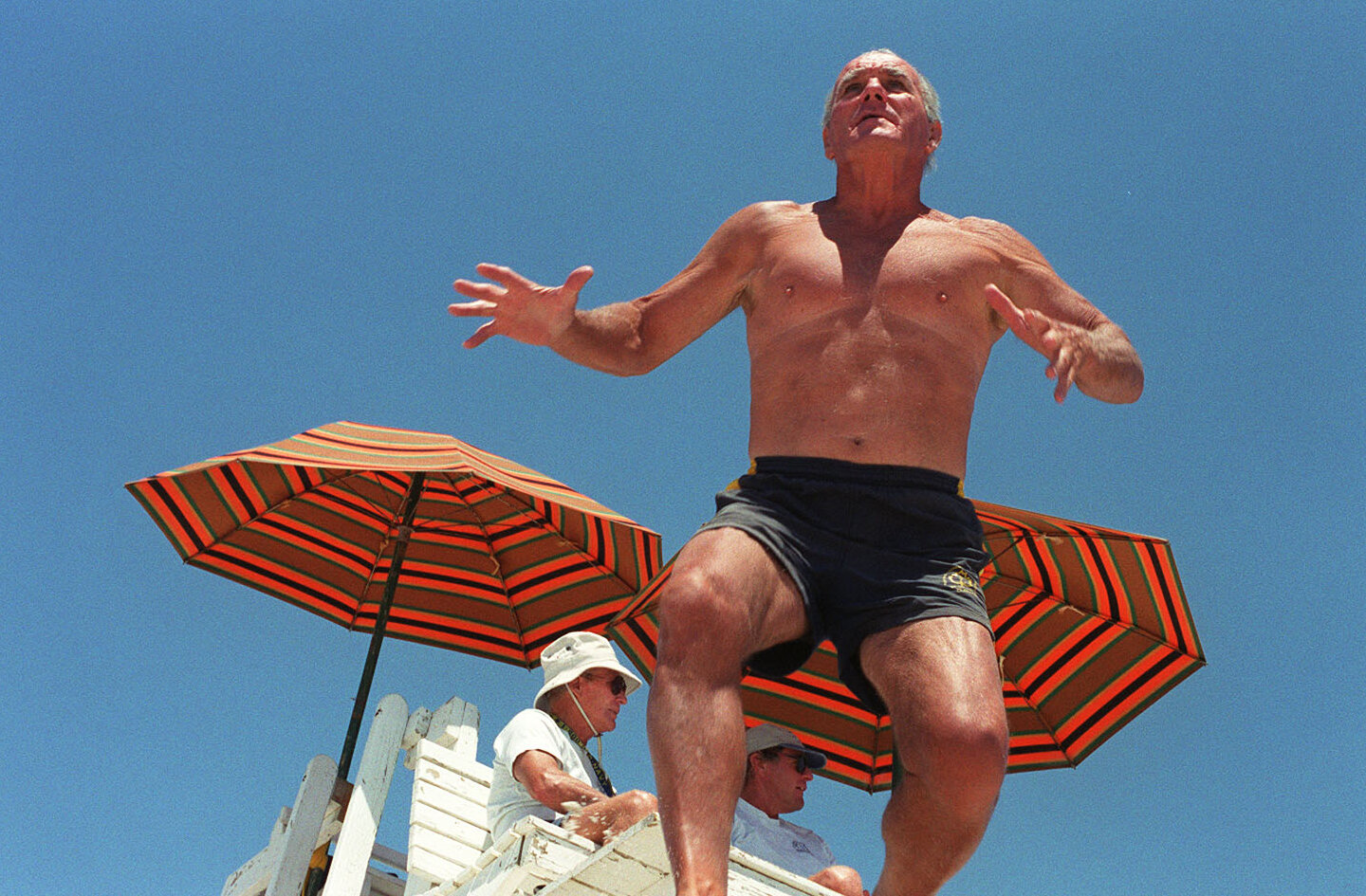 https://www.nytimes.com/2021/02/14/nyre ... ticleShare
One of the downsides of the Internet is that it allows like-minded people to form communities, and sometimes those communities are stupid.
Top

Thanks for sharing! What a bad-ass. 1-arm pull-ups with legs horizontal and passing PT requirements in your 80's are next level goals.
“Mediocrity is not about failing, and it’s the opposite of doing. Mediocrity, in other words, is about not trying.” — Georges St. Pierre
Top

Reggie Jones, whose 64-year tenure made him the longest-serving lifeguard at Jones Beach State Park on Long Island, died on Jan. 30 in Rockville Centre, N.Y. He was 93.

His death, at an assisted living facility, was confirmed by his son, also named Reggie Jones, who said the cause was probably diabetes.

Mr. Jones, a World War II Navy veteran, began his lifeguard career at Jones Beach as a teenager in 1944 and worked every summer — including several years at other state beaches on Long Island — until 2009, making more than 1,000 ocean rescues.

Even well into his 70s, Mr. Jones continued to astound his fellow lifeguards by passing the beach’s notoriously demanding recertification test each spring.

A funny, flamboyant figure, he would show up in his old woolen one-piece tank-top lifeguard suit and pass the strenuous pool sprint. He last passed the test in 2008, when he was 80.

But the next year, he missed the 100-yard swim’s required time of 80 seconds — by two seconds — forcing the seemingly ageless lifesaver into retirement, his son said.

While it was only coincidence that Mr. Jones’s last name was also that of the famous beach he protected, it did seem to further cement his status as its best-known employee.

After retiring from lifeguarding, he spent several years working on the boardwalk as the beach’s ambassador and chief storyteller. This allowed him to continue to mentor lifeguards and to enjoy his intense exercise regimen of vigorous ocean swims, beach runs and weight lifting.

“He loved the whole environment — being outside in the fresh air, the exercise and the social aspect of it,” said his son, an assistant chief lifeguard at Point Lookout on Long Island who has worked for 53 years on the beach himself.

Mr. Jones’s son said that he requested he be cremated and his ashes scattered in the ocean off Jones Beach from a rescue dory.

Albert Reginald Jones was born in Manhattan on April 8, 1927, to Mary Kate and Adam Jones, Irish immigrants, and grew up on Long Island. As a wrestler at Baldwin High School, he won a Long Island championship in 1944.

That same year, his son said, he began lifeguarding at Jones Beach to escape working at his father’s gas station.

“He never had a formal swimming lesson, but he was so strong he could have passed any test,” the younger Mr. Jones said. “Once he got the job, he said, ‘Valhalla, I have arrived.’”

It was a time before air conditioning and backyard pools were widespread. Jones Beach crowds were massive, and the lifeguards, like many beachgoers, dressed modestly.

“The first bikini walked on the beach around 1952,” he recalled. “She nearly caused a riot, and the police took her away.”

In addition to his son Reggie, Mr. Jones is survived by another son, Gavin; a sister, Sheila Uris; and two granddaughters. His son Kevin died in 1982.

Mr. Jones taught social studies for more than 30 years at Garden City Junior High School, where he also coached wrestling. He spent a half-century working as a high school and collegiate wrestling referee and in 1997 became a member of the National Wrestling Hall of Fame.

By the 1990s, Mr. Jones had become the dean of an unlikely cadre of older ocean lifeguards. He worked out of a lifeguard shack at Jones Beach’s East Bathhouse that, because it was a base for veteran lifeguards, became affectionately known as Jurassic Park.

“He called it his annual physical,” Mr. Hahn said. “If it didn’t kill him, he’d be good for another year.”

Off the lifeguard stand, Mr. Jones was either working out or telling stories and jokes to beachgoers, said Bruce Meirowitz, 69, a lifeguard with 53 summers on the beach.

Mr. Jones enjoyed showing off his ability to bang out one-armed push-ups and one-armed pull-ups with his legs extended horizontally.

Cary Epstein, another Jones Beach lifeguard, said that when he began at the beach 23 years ago at age 17, Mr. Jones was still inspiring younger lifeguards by enthusiastically running ocean rescues and working out constantly.

“When I worked with him, he was four times my age, but he took guys like me under his wing and mentored us in how to spot rescues and taught us the love of the beach and the water,” Mr. Epstein said.

Mr. Jones’s most critical rescue was of a large, struggling swimmer in the ocean during a thick fog. He reached the swimmer but could not see the shoreline to swim him in.

“He said that was the most strenuous, exhausting experiences of his life,” his son recalled. “To keep that guy afloat by himself and fight the current. But he did manage to save him.”

Turdacious
Lifetime IGer
Posts: 21308
Joined: Thu Mar 17, 2005 6:54 am
Location: Upon the eternal throne of the great Republic of Turdistan

By the 1990s, Mr. Jones had become the dean of an unlikely cadre of older ocean lifeguards. He worked out of a lifeguard shack at Jones Beach’s East Bathhouse that, because it was a base for veteran lifeguards, became affectionately known as Jurassic Park.
Badass among badasses.
"Liberalism is arbitrarily selective in its choice of whose dignity to champion." Adrian Vermeule
Top
Post Reply